Where is the mobile boom?

Sushil E-Commerce, India, Internet, Mobile No Comments on Where is the mobile boom?

Smartphone ownership in India has grown very quickly, going from less than 10 million to over 100 million in the past three years. Additionally, there are now over three times as many wireless broadband subscribers as wired subscribers. And yet for many Web destinations in India, mobile devices, nearly synonymous with smartphones, only account for half the traffic. Where is the mobile boom that has everyone so excited? Lost amidst the good-news headlines is a worrisome possibility, that mobile usage may fall short of expectations and limit the growth of the Internet economy in India.

The mobile share of traffic seen by sites in India is reported with increasing frequency, and while the articles don’t themselves say so, presumably the underlying message is to exclaim, “Look how much mobile is growing in India!” For example, The Hindu Businessline wrote, “3G data shot up by a whopping 146% in 2013,” which can only be interpreted as a cheerleading message.

However, is mobile growing in India? Let’s start with the distinction between mobile and wireless. Mobile access means, or it ought to, that the Internet activity took place on a mobile phone, smartphone or otherwise. In general, this is a small-screen device. Tablets are devices with slightly larger screens and are generally a class apart from mobile, and desktops/laptops are large-screen devices. Wireless means that the data exchanged during the Internet activity traveled for some part over a cellular telephone network. Local WiFi delivered via a wired connection does not count as “wireless.” Tablets could connect on wireless, as could laptops using a data dongle or MiFi. 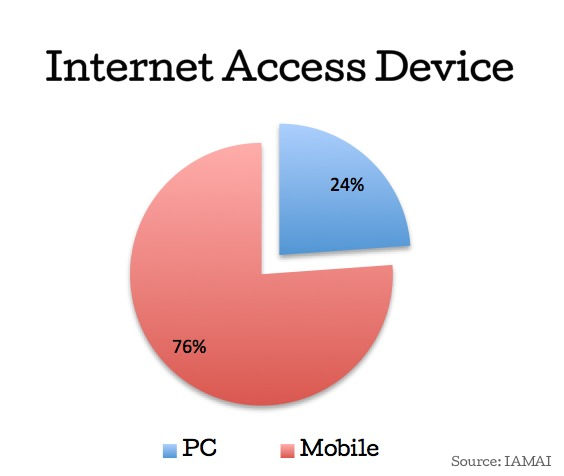 Even if these calculations are out-of-date, other recent announcements of the share of mobile users ought to give one pause. The IAMAI predicted that India would have 243 million Internet users by June 2014, of which 76% would be mobile. . So if a site is getting half of its traffic from mobile, as Snapdeal reported earlier in 2014 (it was reported that sales were 50% from mobile, we assume that traffic matches), mobile users are significantly underrepresented. Other sites get even less traffic, and only Facebook has mobile traffic in line with mobile users. In fact Facebook is slightly over-represented.

There are a few factors that could explain why people are not using mobile more. Poor cellular data speed seems the most obvious one. Earlier this year TRAI proposed setting a minimum rate for wireless data at 1Mbps, which is lower than the average 1.3Mbps connection speed as reported by Akamai for India in Q1 2014. Still, many people could be experiencing speeds suboptimal for data-heavy online usage. However, as mentioned earlier, very few mobile device users access the Internet over wireless, so cellular speeds cannot be a big factor.

The cost of data plans could be another reason, driving people away from cellular usage. The average revenue per user (ARPU) in India is quite low for mobile, especially for prepaid-plan subscribers, who comprise nearly 96% of mobile users. That said, wireless data subscribers only use on average about 54 MB per month, even though it is not possible to buy a data plan with a limit below 300 MB , and therefore they are under-using their data plans. While data costs could become an issue if wireless data usage took off, today it does not seem to be one.

One reason that often goes unmentioned is that for many purposes, mobile devices offer a less satisfying user experience than large screen devices. This is so obvious yet hardly anyone related in any way to the Internet, computer or mobile sectors pays attention to it. To be clear, smartphones are amazing devices and incredibly useful, and they do so many things that it is difficult to walk across the hall without having one in hand. Yet for many tasks, a smartphone will do in a pinch, but a laptop is much more preferable. Take, for example, vacation planning. Any decent travel booking site now offers many filters on the side of the page for narrowing down the flights available, and the results change in real time. On a smartphone, displaying the filters requires a touch, and depending on the number of filters, one may have to scroll, and then it requires a touch to apply the filter, then wait for the results. Repeat a few times and it can be a lot more frustrating than it sounds.

This drawback on the part of mobile devices is not an India-specific problem. But with PC access limited to about a tenth of the population, it does mean that Indians use mobile devices because they have to and not by choice. E-commerce is another category where using a mobile can be painfully frustrating. In the US, where home computers are more widespread, mobile e-commerce will only account for 19% of total Web sales in 2014 according to eMarketer, and Comscore puts it even lower for the second quarter, at 11.1%, nearly the same as for the prior three quarters. Moreover, it appears that people in the US use mobile to virtual window-shop, and transaction completions are higher on PCs. Snapdeal’s mobile sales levels are quite high even compared to other e-commerce sites in India, and may be nearing a peak if those sales are coming over wired networks.

There is no denying that e-commerce in India is growing. However, it could hit a wall if there aren’t accompanying growths in PC and broadband penetration. A 2013 study by KPMG, albeit commissioned by the Manufacturers Association of Information Technology (MAIT), suggested that increased PC penetration would have significant positive impact on employment, GDP and tax revenue. Yet the recently announced “Digital India” program by the Indian government makes no mention of increased PC ownership, instead focusing on connectivity, increased government e-services and other topics. These initiatives may be for nothing if people do not access them because of lack of PCs.